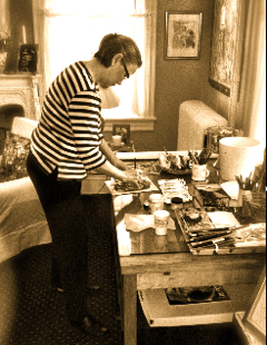 Wendy Csoka grew up in Sea Cliff, New York. She attended the University of Arizona from 1967 to 1969. Wendy has been painting since the 1970s. Frank Csoka, her husband, and her father-in-law, the artist Stephen Csoka (1897-1969), encouraged and supported her talent and interest in painting.

Frank, now retired, was an Assistant Professor in the Communication Design Department at the Fashion Institute of Technology in New York City. In 2003, Frank was given a sabbatical from Fashion Institute to design and produce a book on Wendy’s art. “Everything is asleep until it wakes up, the Art of Wendy Csoka” is the title of the book about her career and art.

“These visions of creativity are a positive and powerful reminder of how once touched by an artist, as I have
been by Wendy Csoka’s artist vision, you become not just a fan of the work, but an admirer who is ever so grateful that visionaries like Wendy Csoka create in our midst.” – Robert Spiotto, former Artistic Director, Community Arts Programs, Hofstra USA Productions.

Painter, Wendy Csoka, draws inspiration for her art from the world around her, touching on universal themes of love, compassion and nature. Painting large, colorful canvases since the early 1970’s, she has shown in solo and group shows. Her paintings were exhibited at SAKS 5th Avenue, Huntington Station, NY, during their fund raising effort, Fashion Targets Breast Cancer. Her art has been used by health groups and corporations such as Pfizer, which published several images of her work in medical brochures.

In March of 2000, Wendy was presented with a Certificate of Recognition “for your contribution to the world of arts
and strong commitment to women’s health issues. Congratulations as you are honored by the New York Tate Division for Women during the celebration of Women’s History Month in the year 2000.” Governor George E. Pataki. Wendy was invited to exhibit her work at the Governor’s mansion in Albany, NY.

Wendy was one of the women selected as the “2001 Women of Distinction for the Fifth Senate District.” The award program recognizes the extraordinary accomplishments of New York State’s exceptional women.

Shipping & Handling - $7.95 for all orders within the U.S.; except for Framed artwork which is quoted upon request and varies by location; and  Free or Reduced Shipping requiring a coupon code.